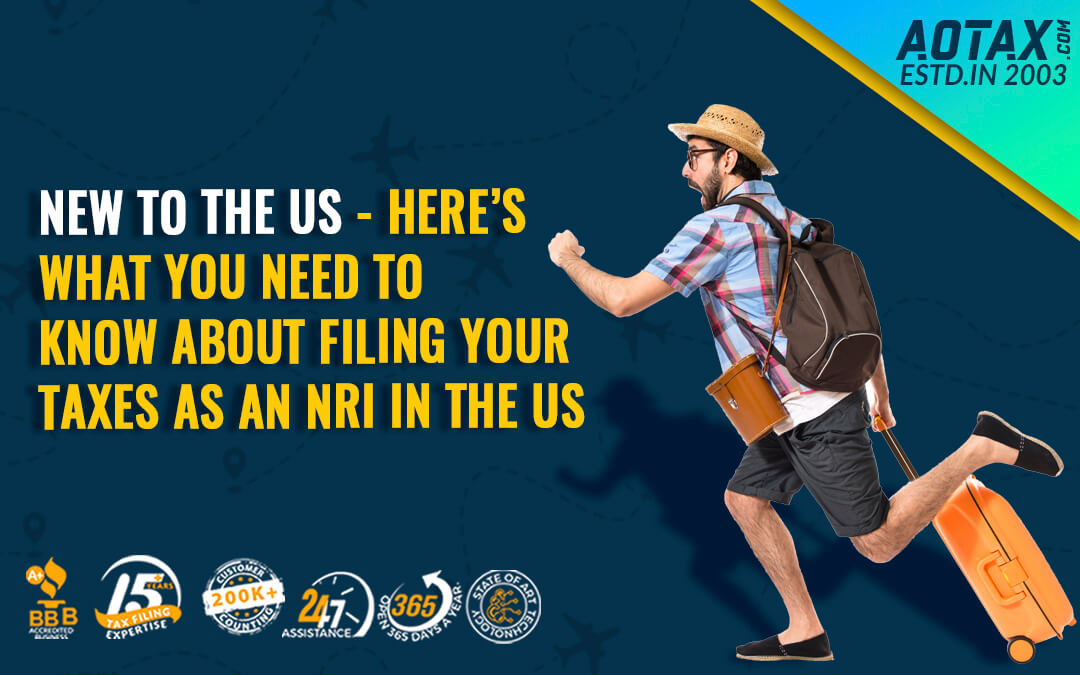 New to the US – Here’s what you need to know about filing your taxes as an NRI in the US If you are a US resident or a US citizen i.e. an NRI, PIO or OCI you must have to pay taxes to the US Government on the global income which you have earned.  A person would be defined as a US resident only if he is able to meet either of the below-mentioned tests. If during any period of a particular calendar year, according to the laws of immigration you were a permanent resident of the United States and this status has not been abandoned by the law then you would be considered to have passed the Green Card Test. The Substantial Presence Test states that you should have been present in the United States physically for a period of at least 31 days during a particular year and 183 days during the three year period which would include the current tax year and the 2 years immediately before the current year.   If you have a green card, then you would be considered to be a US resident for the purpose of tax irrespective of the place where you are living. In case, you are a Visa holder then there are more complicated rules associated with the Universal Taxing Jurisdiction. If a taxpayer is having income or receiving a salary from India, then that has to be reported by filing Form 1040. Also, the taxpayer would fill up form1116 if he is claiming the tax credit. By the Double Tax Avoidance Agreements (DTAA) NRIs would be eligible to receive credits for the tax that has been paid in India. This would help in providing protection from paying taxes in both nations.   FBAR Information The FBAR Form can be considered as a reporting form for those US citizens who hold $10,000 or even more in a foreign financial account. Moreover, it is necessary for you to include the instruments like mutual funds, life insurance plans, accounts where you are considered as the signatory authority only.  FATCA Reporting – Form 8938 Certain taxpayers from the US who are holding some specific foreign financial assets with an aggregate value that exceeds $50,000 must report information about the assets on the Form 8938. This form must be attached to the annual income tax return of the taxpayers. Those US taxpayers who are residing abroad or who file a joint tax return can have the privilege of a higher asset threshold. Foreign Tax Credits Foreign Tax Credit is a non-refundable tax credit for the income tax which has been paid to the foreign Government due to the foreign income tax withholdings. This credit is mainly available for a taxpayer if he has either worked in a foreign nation or has some income from investments into foreign sources. There are some qualifying factors which would help in understanding if a taxpayer would be eligible to obtain a tax credit or not.  Foreign Earned Income Exclusion There is a concept of Foreign Earned Income Exclusion by which those citizens who are working outside can avail the advantage of the reduction in their taxable income. Taxpayers can also get the benefit of excluding their house expenses; however, this can be availed with the limit. There are certain rules as to who would qualify for this tax exclusion. Conclusion So, now with these important facts related to the taxation associated with the NRIs, it would be easier to have a clear understanding of the tax norms for the NRIs.