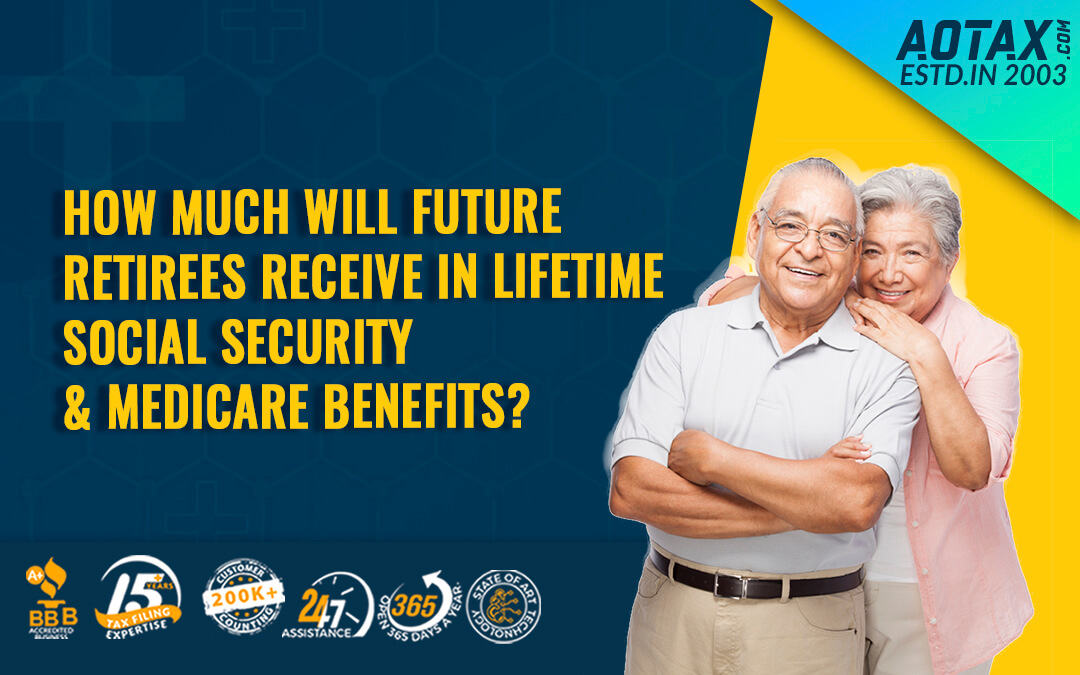 Millennial couples who would retire around 2060 would approximately be receiving around $2.2 million in the form of lifetime Social Security and Medicare Benefits. This amount would be approximately double of the amount that a couple who would be retiring this year would receive.  The total Social Security and Medicare benefits are expected to rise even more for those generations which are born after the year 1995 if these programs would provide the continued benefits.

With the rise in Social Security and Medicare benefits, the gap which is present between the benefits and the payroll taxes the employees owe will keep on growing. The main reason behind this is that the low cost of Medicare was designed in such a manner that it would only provide cover for the hospital costs; but the program now would provide cover for visits made to doctor, outpatient procedures, drugs prescribed and other categories of medical costs.

The increase in benefit amounts

The amount of Social Security and Medicare Benefits would be seeing a significant increase in future retirees. The most important cause behind this is that there is an increase in Social Security Benefits and the Medicare expenses are increasing due to modern health care services. Moreover, when life expectancies are higher it would imply that the Americans who are going to retire in the future would receive many more years of this benefit.

However, the major cause behind the financing gap which is prevalent between the benefits obtained and the taxes is the decrease in the birth rate starting in the mid-1960s. There has been a resulting shrinking in the number of the workers relative to the retirees and this has a special force in the period in which the Baby Boomers had started collecting these benefits in between the tax year 2008 and the mid of 2030s.

These issues would very soon come under the supervision of one head as the Congressional Budget Office Projects. The Government would not be able to pay complete benefits out of the funds of the trust for Social Security by the tax year 2031.

The new President Biden has also recommended a further increase in the benefits available for the retirees i.e. approximately 9% on an average for those retiring by the year 2065. Moreover, the work of the Urban Institute reflects the fact that these changes would be able to extend the life span of the Trust funds for Social Security by only 5 years.

Many workers at present have to face an implicit trade-off irrespective of their level of income.  The Government has promised higher Social Security and Medicare Benefits at an older age, but it has also set a small portion of its budget for the younger people and families for other programs such as student loan balances, children fall, and other programs not related to retirement.

A large scale budget is the only solution to this trending problem related to Social Security and Medicare Benefits.

So, it is necessary to understand the issues that have been present across several generations related to retirement and health benefits along with the taxes which would be applicable across the country. 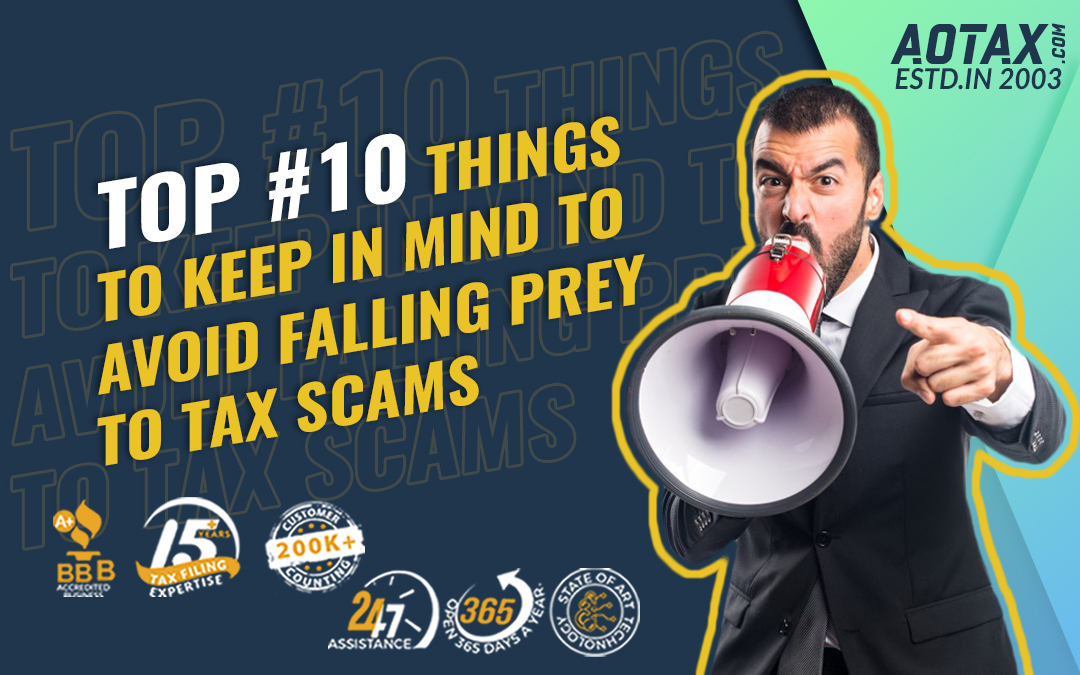 Tax scams are common happening throughout the year. However, with distressful times caused all around by the novel coronavirus tax scammers are finding this as an ideal time for catching up new prey. Usually, it is seen that young Americans are most likely to fall prey to the tax fraudsters and scammers.

The IRS has been continuously creating awareness amongst the Americans against the increased tax scams, frauds, and cons. The IRS has informed the common people about the various in which tax scams can occur may it be in the form of abusive tax schemes, telephone scams, or even in the form of phishing schemes. The IRS urges the Americans to be alert and prevent being a victim to any scams or any such schemes which might be offering instant money or exemption from filing tax returns or paying taxes as the citizen of the United States. Any such schemes or offers can land up common people into big troubles like prosecution and imprisonment as well.

Let us have look at the most important things which need to be kept in mind by the Americans to avoid falling prey to tax scams. 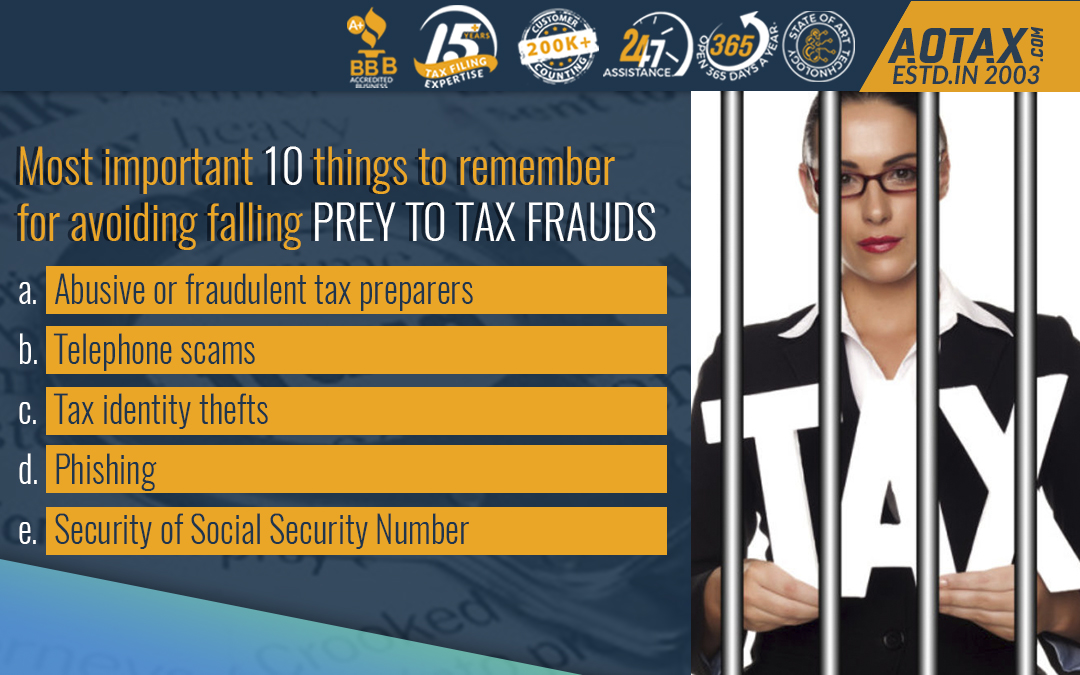 The majority of the tax preparers are quite honest and do the tax preparation legitimately, but some can be fraudulent. Fraudulent tax preparers can file returns by the use of false information to boost the refund. Some taxpayers might even attempt to steal personal information that is present in your tax documents. Taxpayers must be very careful while selecting their tax preparers and must remember that the ultimate responsibility for information used in a tax return is theirs.

This can happen when criminals pose to be IRS agents and call the taxpayers to threaten for paying overdue tax bills. These imposters use fake names and phony IRS identification badge numbers. Taxpayers should always remember that the IRS would never adopt threatening as a strategy to deal with common people. Moreover, the IRS would also never call up taxpayers for immediate payment using a debit card or any other medium. It would usually send you mail in case of any payment due or any other issues.

Tax identity thefts occur when a tax fraudster tend to use taxpayer’s information and obtain income tax returns from the IRS. This might occur even before income tax returns have been filed by the taxpayers. Fraudsters can steal taxpayer’s Social Security number and file returns early in the season. Usually, fraudsters try to use this strategy for deceased persons to obtain the benefits.

Phishing occurs by unsolicited emails or websites posing as legitimate sites that can lure the victims to share their personal and financial information. The intent of the fraudsters here is not to use the taxpayer’s information only for tax-related scams but also to store the information for use in other frauds in the future. 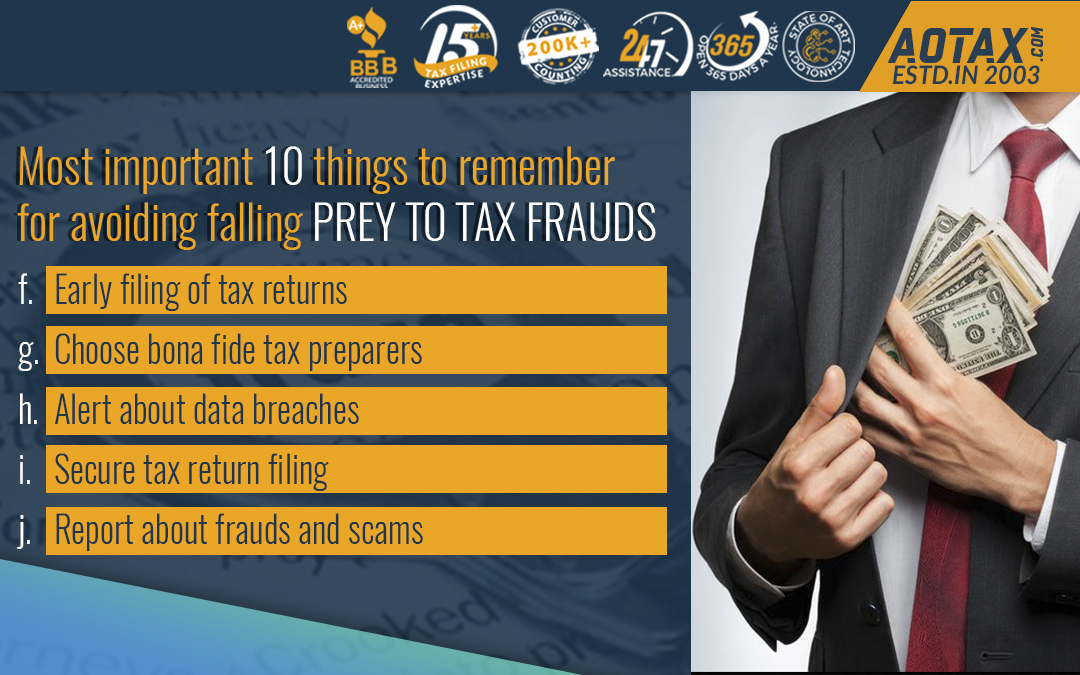 Data breaches help the fraudsters in obtaining the information which is needed to execute the tax identity thefts.  Sometimes, tax scammers might be having very little information and they can use phishing emails to gain further information. It is very necessary for taxpayers to be aware of data breaches and secure their information in case of any breach.

j.Report about frauds and scams

Taxpayers are encouraged to report any fraudulent practice, impersonation scam, phishing scam, etc. to the IRS by using the various tools of the IRS such as IRS Impersonation Scam Reporting, FTC complaint assistant or by sending mail to phishing@irs.gov.

Hence, taxpayers must be very alert about the different types of tax scams that are happening very frequently and must report to the IRS about such scams.

In response to the outbreak of the pandemic COVID-19, the Federal Government had delayed the deadline for filing Federal tax returns and for tax payment as well. However, it was advised that if you had to receive a tax refund from the IRS then it would be wise to file the tax returns soon. Due to the coronavirus and the social distancing norms, it was not only difficult for the taxpayers to prepare and file the returns but also for the IRS staff to process the refunds.

In these difficult times, it is always good to have some additional cash and everyone needs this additional amount but the tax refunds for 2020 would be delayed.

IRS Operations with a reduced workforce

The IRS offices were closed across the entire country and it was operating with limited staff and resources. The most important task which the IRS has been doing in the past two months was the issuing of Coronavirus Stimulus Payment to around 150 million Americans which can be termed as a “mission-critical” function.

Due to the outbreak of the pandemic COVID-19, the IRS had limited the services it was rendering. The live phone help has been suspended and even the Taxpayer Assistance Centers were closed. Still, the official webpage of the IRS says that they have been carrying out the critical functions pro-actively. Specifically, the IRS has been processing Federal tax returns and issuing refunds to the Americans even with limited staff. From 1st June 2020, many IRS staff members would have returned to their offices for performing those tasks which cannot be done from home. These staff members on resuming work would begin with the backlog of work they have which would mainly consist of processing tax returns and issuing refunds to the people.

According to the IRS, the fastest method by which you can receive your tax returns on time is by filing your tax returns electronically. Most of the taxpayers who would use the e-filing method and would choose Direct Deposit would receive their tax refunds within 21 days of the filing. However, there would be delays in obtaining tax refunds by those taxpayers who would opt for the paper return method.

More than 10% of the American population still uses the paper method for filing their tax returns. The closure of the IRS offices means that IRS would not be able to process those returns which have been mailed in. So, when the processing of returns would be delayed then obtaining a refund would also be delayed.  Currently, it is unclear as to by when the IRS would be resuming the processing of those returns which have been filed by paper.

According to several reports, by 1st May 2020, the IRS had received around 125 million Federal Tax returns and it had processed 113 million tax returns approximately. There has been a 7.2% drop in the refund processing rate of the IRS due to the pandemic COVID-19.  However, the average tax refund this year is $2973 and the IRS says that it does not expect any delay in issuing the outstanding refund requests as well.

Other causes for tax refund delays

Apart from the coronavirus, there can be some other reasons which would cause a delay in the process of obtaining tax refunds. In case, you have filed your tax returns too early and have claimed the Earned Income Tax Credit or the Additional Child Tax Credit then you will have to wait longer there might also be a delay if you have filed your federal tax returns either faster or later.Moreover, other causes for delay in obtaining your tax returns could be due to wrong Social Security Number, incorrect bank account number, misspelling of your name, wrong calculations or you have outstanding debts such as back taxes, child support, or Federal Student Loan, etc.

You can keep a tab on your Income-tax refunds by checking your Tax Refund Status regularly and understanding the details associated with tax refunds.