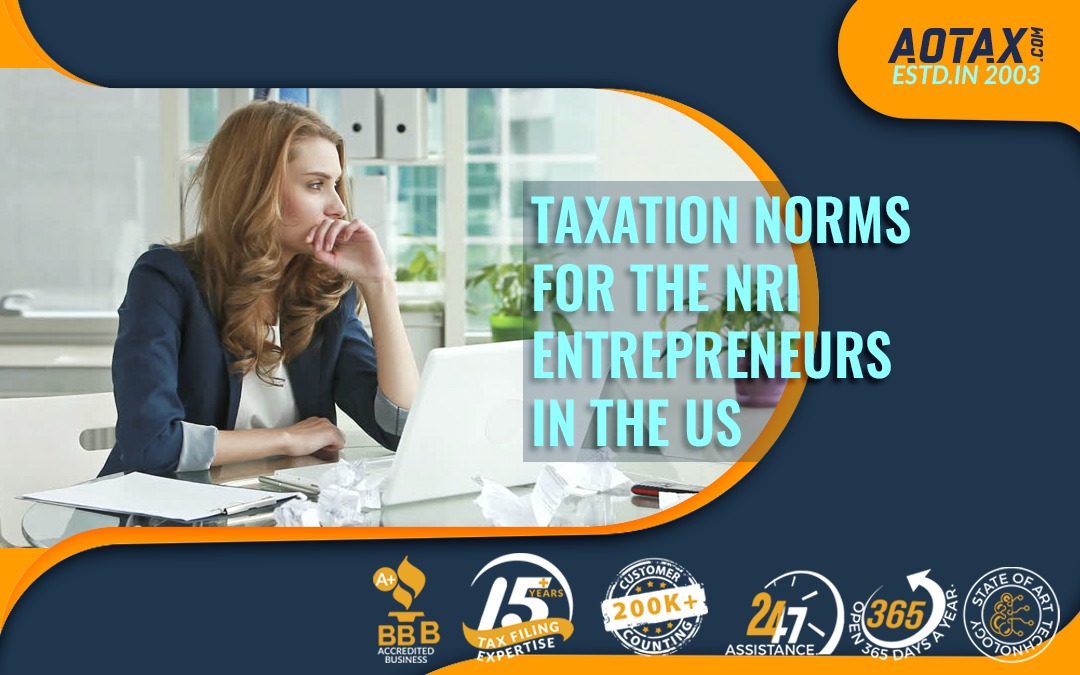 Taxation Norms For The NRI Entrepreneurs In The US

Taxation Norms For The NRI Entrepreneurs In The US

Getting your idea into a working model can be strenuous and require a lot of effort. taxation norms for NRI entrepreneurs in the US. If you have to worry about taxes on top of it, things can get a bit out of control. Taxes for individuals and businesses work entirely differently. And not being aware of these might result in Entrepreneurs paying a lot more taxes than they ought to or getting into a lot of unwanted tax-related problems that could have been avoided. Here are a few simple tips that can help you avoid these conundrums.

The type of legal entity that you choose for your business plays an instrumental role in deciding the applicable taxes. For example, the taxes for a corporation differ from that of a partnership and it differs from a sole proprietorship. Needless to say, each entity has its advantages and disadvantages. And you must pick an entity that best serves your interest and helps you save on the taxes as well. For instance, startups usually stay away from C corporation due to double-taxation. Since the company pays taxes and the individual owners must also pay taxes. LLC (Limited Liability Corporation) and S Corporations manage to avoid double taxation.

It is recommended that you get into the habit of bookkeeping as early in the company’s lifecycle as possible. Here are some easy ways of ensuring the same.

Failing to separate personal and business finances can have severe consequences. In case of a lawsuit, the opposition lawyer can sue you from the organization’s point of view and personally also. In extreme cases, the Secretary of State can strip your company’s corporate status as well.

Another crucial step is determining the significance of full tax compliance. While a lot of it has to do with the legal entities, the city and state also play an important role in the same. Some of the larger cities levy Business Privilege taxes on the companies that operate within the city. Usual taxes are on the net profits of an organization, but the business privilege taxes are on the gross income. A simple example would be, if you sold products worth $500,000 in the previous year, you would owe a percentage of the income to the city.

Paying your taxes every quarter is a habit that one must inculcate as an entrepreneur. This will help you plan for your taxes in a more efficient manner. Also, you will not be surprised by a huge tax bill at the end of the year. A little bit of trouble every quarter will save you from a lot of headaches down the line.

A proper knowledge of taxes and the norms is very essential for everyone planning taxes and their liabilities. For all NRI entrepreneurs it is no exception and thus, they should also know the basics of taxation laws.

The tax liability of an individual in India relies on the residential status of the individual. Taxpayers who qualify as resident Indians are taxed a bit differently than taxpayers who qualify as non-residents. While the definition of resident and non-resident has been around for quite some time, the Income Tax Department only recently has started looking into it with a lot of scrutiny. Global Tax Filing For NRI’s Residing In The US.

The following conditions will help you to determine whether you qualify as a resident or non-resident.

If you do not meet the above conditions, you are a non-resident Indian. The IT department has started looking into the residential status of individuals and it is the reason why quite a few NRIs have been receiving notices from the IT department. The tax implications are one of the major reasons why residential status is important. While residents are taxed on their global income, non-residents only have to pay taxes on the income that is generated or accrued in India.

India and the USA have signed the DTAA or the Double Taxation Avoidance Agreement. This agreement ensures that taxpayers do not end up paying double taxes on the same income in both countries. There have been certain changes as far as claiming tax relief under the DTAA is concerned. Individuals who benefit from the DTAA will now have to furnish additional details before being able to claim the benefits.

Taxpayers now much provide additional details to the Income Tax department such as the Tax Identification Number of India, all the assets that they hold both in India as well as the USA. The directors or shareholders of an unlisted organization must disclose the same in their tax returns along with the Permanent Account Number of the company in question. NRIs must now also mention the number of days that they have stayed in the country versus the number of days that they have stayed out of the country.

The tax reforms intended to bring about more transparency to the tax filing process by disclosing additional details. And this is particularly for individuals who claim benefits under the treaty signed between the two countries. By implementing these changes, the Income Tax department hopes to reduce the need for further investigations by the tax authorities.

As per the new norms, residents now have to provide additional details of the salary received, its breakdown, any unlisted securities that they hold, list of agricultural land that they hold and the income generated from it, should it exceed a certain threshold, any donations made, etc.

There haven’t been any changes to ITR-1, which is primarily for individuals whose annual income doesn’t exceed INR 50 lakhs. This is for individuals who draw a salary and have a house apart from other income sources such as interests earned and income from agriculture up to INR 5,000. ITR 2, 3, 5, 6 and 7 have undergone minor changes.

ITR-2 is for taxpayers and HUFs who do not make any profits or gains from a business while ITR-3 is for individuals and HUFs who make profits and gains from business or their profession. Thus, it is essential that you take some time to access the right ITR before you can file your taxes to ensure that you do not receive any notification or notice from the IT Department.