Correlation between Exempt and Refund 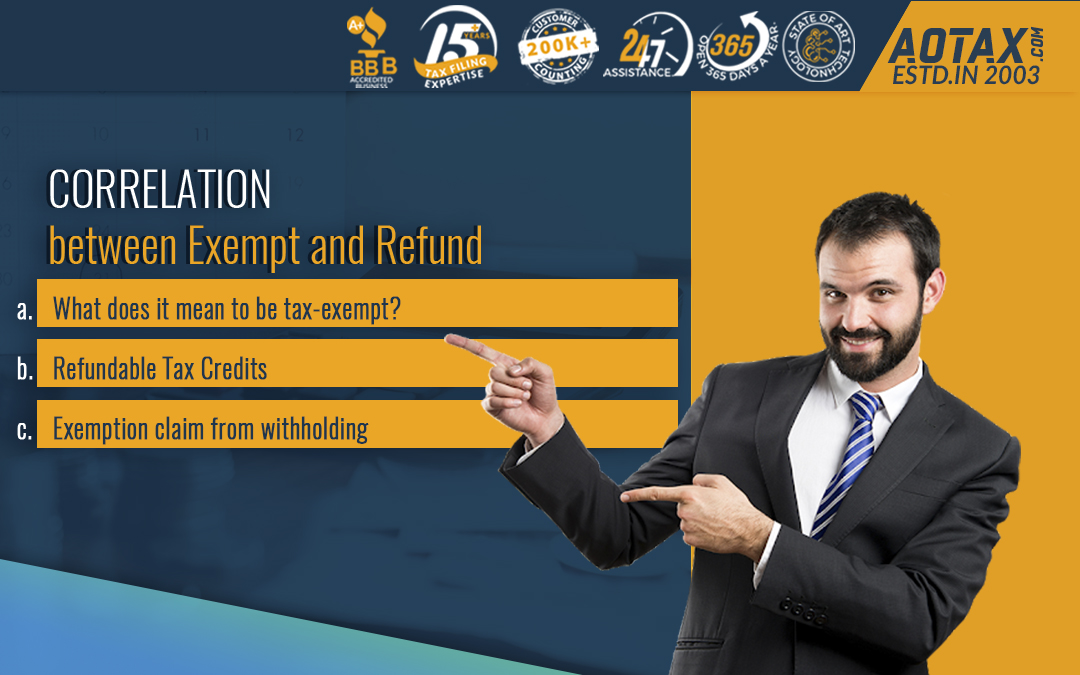 Correlation between Exempt and Refund

However, there can be a scenario when money has not been withheld from the paycheck of a taxpayer. In such a case, will the taxpayer be eligible to obtain a tax refund even though he is tax-exempt?

What does it mean to be tax-exempt?

When a taxpayer is filling the Form W-4 from his employer, he would be adding up his withholding allowances. If the income of the taxpayer is less than his Standard deduction then he would be exempted from paying any Federal Income Tax.

But, in case a taxpayer has some tax liabilities in the previous year or owes to have some tax liabilities in the present year then he cannot be tax exempted. If a taxpayer had $1 of tax in the previous year or even expects earning more than the sum of his Standard Deduction i.e. $12,400 for Single taxpayers, $18,650 for the Head of the Household or $24,800 for those who are married and filing tax return jointly then it is not possible to be tax exempted in the current year.  When a taxpayer is exempt, he has no amount being withheld from his paycheck thus, leading to no refunds as well.

However, there can be certain conditions in which a taxpayer can be eligible to receive a tax refund even if he is exempted from paying any taxes.

Let us have a look at the most common Refundable Tax Credits which can help in obtaining a tax refund even if tax-exempt.

If a taxpayer is not able to claim exemption from his withholding, he would still be able to reduce the amount withheld from his paycheck. This can be done easily by updating the Form W-4 and changing the withholding. The IRS has redesigned the Form W-4 and now the form available in the W-4 Employee’s Withholding Certificate. The earlier version was known as the W-4 Withholding Allowance Certificate and it has been updated for reflecting the changes. The major change in the tax system was that there has been an elimination of the personal allowances as allowances are connected with the dependents of taxpayers and with personal exemptions which have been removed. The Form W-4 which has been redesigned would consider if a taxpayer would be able to claim the Child Tax Credit and if he would be able to claim tax deductions that are different from the Standard Deduction.

Hence, before considering that any tax refund would not be received from the Federal Government taxpayers must understand their eligibility for the Refundable Tax Credits. Taxpayers might get some tax refunds even after being tax-exempt, but this is only feasible if the tax returns are filed.