Tax Deductions for Charity and Donations this Christmas available to NRI’s in the US.

Tax Deductions for Charity and Donations this Christmas available

If you are an NRI and are planning to make donations for this Christmas, then your charity and donations would definitely have an impact on your tax deductions.

You should not be influenced by the scammers in light of the charitable opportunities that have occurred due to the various events being triggered throughout the year. You must ensure that the charity or donations done by you during Christmas are done to a 501(c) (3) non-profit organization.

Qualified organizations would include non-profit organizations that are educational, charitable, religious, scientific, or literary. The IRS website would help you in determining if the organization to which you are donating is a qualified one or not.

Due to tax reforms, there have been various changes introduced in the itemized deductions, but the deductions related to charitable donations remain mostly the same with a few changes. If you are making any donations of money or goods this Christmas, then you can claim your donations by itemizing your tax deductions. In general, if you are opting for a Standard Deduction then you would not be able to claim any deduction for your donations but there have been certain changes under the CARES Act.

As per the guidelines of the CARES Act, there would be an addition of a new charitable deduction up to $300 on your taxes for this year if your donations have been made to a 501(c)(3) organization and even if your tax deductions are being itemized. You must keep this in mind as most of the NRI taxpayers claim the standard deduction and do not itemize thus, making it infeasible to deduct the donations under the tax reforms.

There have been certain changes made to the provisions related to tax reforms. These changes would include the below-mentioned points: –

Due to the tax reforms, around 90% of the NRIs would now opt for Standard Tax Deduction which was around 70% during the previous years. For the tax year 2020, the standard deduction has been increased to $12,400 for those who are filing returns as single individuals or has increased to $24800 for those who are married and filing their tax returns jointly. In case, if you are filing the tax returns as the Head of the Household then the permissible Standard Deduction is $18,650. You can either claim your Standard Deduction or itemize the tax deductions based on your expenses which are tax-deductible.

It might happen that you might be in the category in which the standard deduction is more than the itemized deduction and you would choose Standard Deduction.

If you are closer in proximity to the Standard Deduction threshold it is feasible to increase your tax deductions and then itemize your deductions if the charity is done towards the end of the year. By doing so, you would be helping someone who might be in need and also would increase your tax returns.

For example, state and local taxes to be paid are around $10,000, $8,000 for mortgage interest, and $2,000 for the charitable contributions, which totals to $20,000 of itemized deductions. If you are filing your tax returns as a single individual, you would prefer to itemize your deductions since $20,000 is greater than $12,400 which is the standard deduction. However, if you are filing as a married couple you will be claiming the standard deduction of $24,800 instead of itemizing your deductions unless you end up with about $5,000 more in itemized deductions.

Hence, you should not worry about the standard deduction threshold or itemizing deductions. You can follow the IRS guidelines and know in detail about these changes related to the deductions and itemizing. 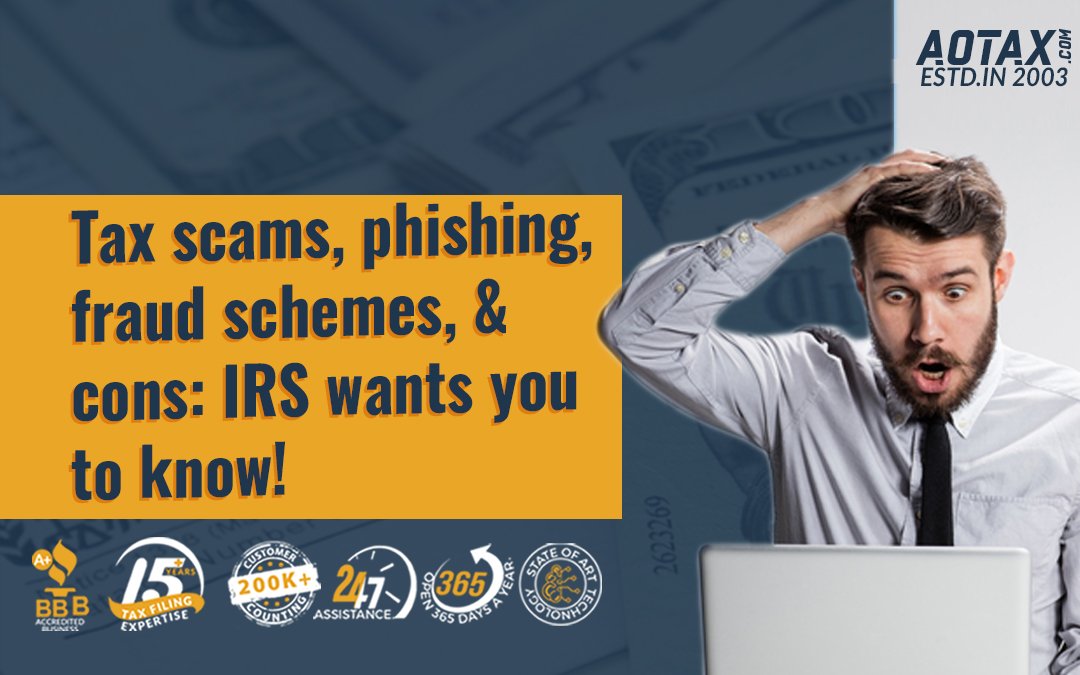 In the US, there are thousands of people who have lost a huge amount of money due to various tax scams. These tax scammers are highly dangerous and tend to use the telephone, regular mail, etc. to make an impression and appear like businesses, payroll, and tax professionals. Educating yourself and being alert is the best way by which you can avoid being prey to these dangerous scammers.

The IRS would never contact you by any text messages, emails or telephone calls. You should consider this as a thumb rule for identifying fraudulent tax scams. Moreover, if you are participating in an illegal scheme for avoiding the payment of taxes then it is an offense that can lead to re-payment of taxes along with payment of penalties and interest. 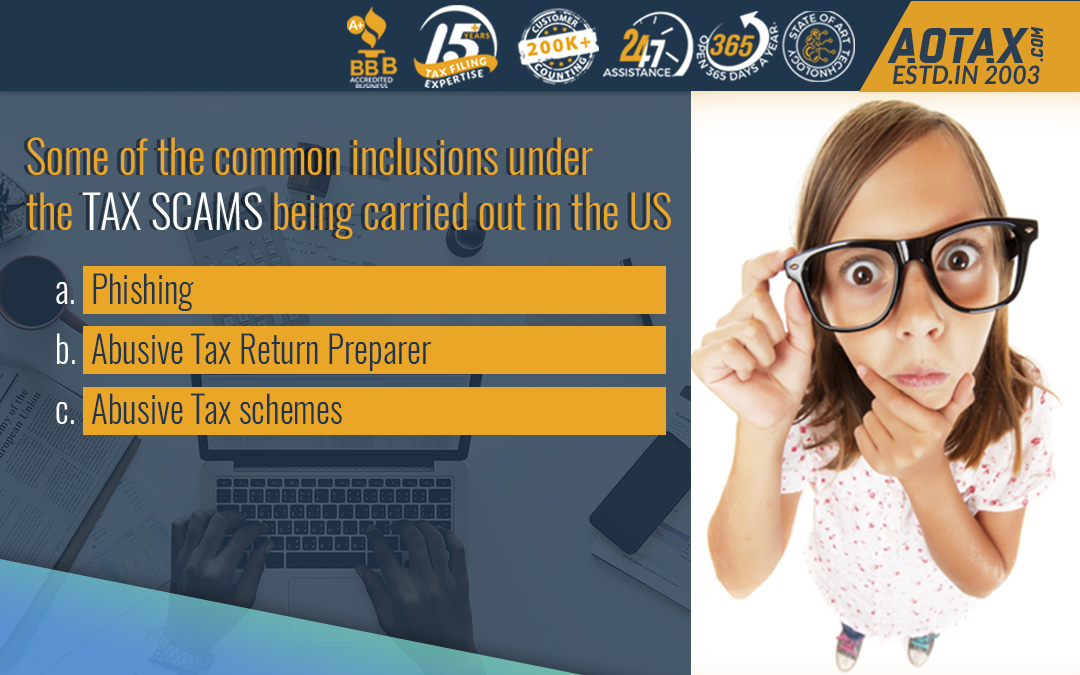 Tax scams include a plethora of illegal and abusive methods used for filing tax returns or reducing taxable income, etc. Some of the common inclusions under the tax scams being carried out in the US can be summarized below.

Some unsolicited emails or websites pose to be legal ones and try to find out personal information from you. You would not have slightest of doubt on these websites as they appear to be completely legitimate but would be very risky in actual. This practice is known as phishing and is quite a common tax scam.

This scheme consists of a series of domestic trusts layered upon each other. This set up is made in such a way that it appears that you have turned your business and assets over to a trust and you no longer have any control over your assets. Then once the business and assets are transferred to the domestic trust they are passed on to foreign trusts, especially which are in tax haven countries. The trust documentation and business records will make it appear as if you are not in control of the assets or business anymore but in reality, nothing changes.

In this case, you will create an IBC with the same name as that of your business.  The IBC which you have created will also have a bank account in a foreign country. When you receive a cheque from customers, you can send those to the foreign country’s bank account.  The foreign bank will use the correspondent account to process the cheque received and it would never be known to the customer. When the cheque is cleared, the IBC account is credited with the payment. So, by this, you have been able to transfer your unreported income offshore without any notice.

You will set up an IBC with your nominee as the owner of the IBC in a tax haven jurisdiction. You can then open a bank account under the IBC. You would be a signatory of the bank account according to the records of the bank. Your nominee would issue invoices to the business for those goods which have been purchased by you. You can now send the payment to the IBC which is deposited in the joint account held by you and the IBC. You can now display your taxable income as reduced and also would have been successful in placing unreported income into a foreign bank account.

Combating tax scams in the US 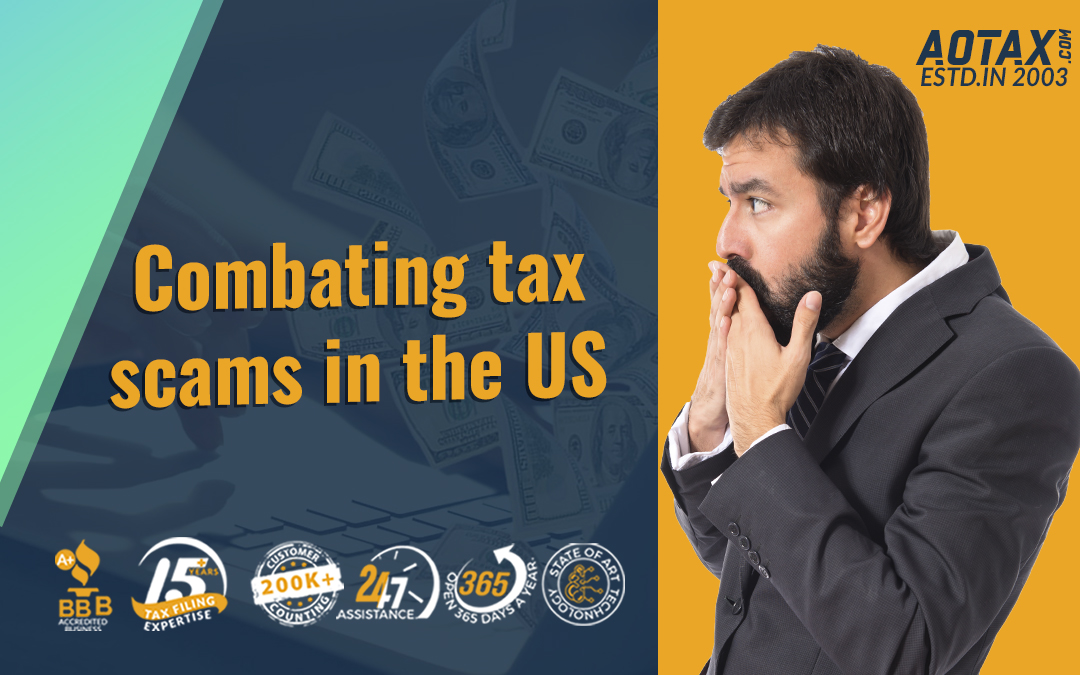 It is one of the most important priorities of the IRS. The IRS has been organizing various awareness campaigns and even circulates educational materials that can educate people. The IRS Lead Development Center constantly works on keeping the tax scams under control in the country. Whenever a referral is received LDC would follow up on them and even conduct civil and criminal investigations.

The IRS would also need the support of common people in this procedure of combating fraudulent tax scams. Whenever you are suspicious about an email or a message related to tax exemption you should report about it to the IRS.

Hence, tax scams, abusive tax return preparers, abusive tax schemes, etc. can be very dangerous and put you into huge monetary losses. The only effective method to avoid such losses is to be alert, educate yourself and support the IRS in keeping a check on the number of such scams.